Do You Have Non-Soulmate Chairs In Your House!? 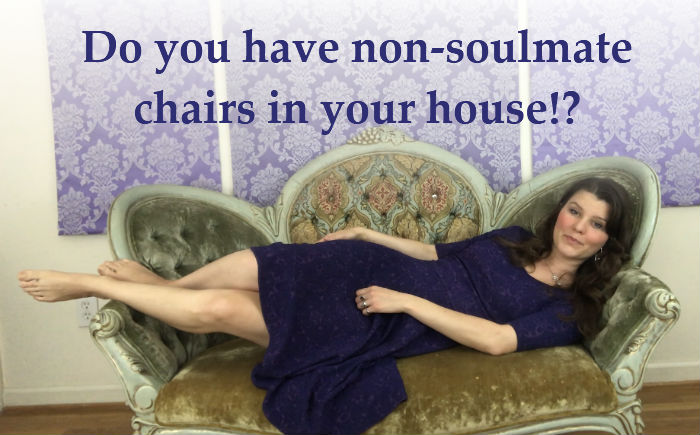 Do You Have NON-SOULMATE CHAIRS In Your House!?

Ok, so I bought the soul mate couch!! The couch you see me sitting on here… TOTAL SOULMATE COUCH!!! The other 2 chairs that you don’t see pictured that I also bought at the auction… not soulmate chairs.

But I’ll get to that… in my story here….

So about a month before I was thinking about what I wanted in the ultimate vision for my living room to be. How I wanted to FEEL when I was in it.

How I wanted it to LOOK…

How I wanted to feel supported and feel surrounded by luxury…

And how I wanted to feel like it was TOTALLY ME!

If anyone walked into my living room, they would be like… “Oh, yeah…. you would have that! That is soooooo you!”

THAT was the vibe I was going for.

And in my mind I saw the triply 1880s curly furniture that I like in brocade and velvet. I saw my sassy curtains that kind of matched, and kind of not. And I saw not only feeling good on the couch, but also filming my YouTube videos in there so the whole living room was not only a place where I could feel good, but the whole thing was also a filming set instead of just my desk area.

And I did what anyone would do… I got onto FB shopping / Craigslist and checked out the Victorian furniture. It was all too expensive OR moderately cheap but in serious need of new upholstery.

And I thought… wouldn’t it be nice, if I could just find something newer, a reproduction is fine, so that it doesn’t contain horse hair and mold, and it was already painted, (I can’t do chemicals of any kind) and it was already upholstered in trippy damask fabric (I don’t know how to upholster) and it was ALREADY done for me. And I could just BUY it. That would feel so much better than going thru all the motions of creating/paining/upholstering what I wanted etc.

Then I decided that what I wanted would come to me. And I would know it when I saw it. And that I didn’t need to do too much. Basically I then stopped thinking about it.

Fast forward 2 weeks and I wake up to a text massage from my friend about an auction where the excess stuff from a restaurant is being sold… this SOUMATE COUCH being included. And it was filled with gaudy frilly furniture! I was elated!!!!

So I bought the epic couch you see pictured, and I bought 2 other chairs in good shape — but NOT in alignment with my ULTIMATE LIVINGROOM VISION.

And I bought them to make money on. And brought both these two chairs to places I had sold to in the past… and they were rejected due to excess inventory etc. Now I have 2 non-soulmate chairs. In my house. Taking up space.

So here is the point of my story…. Where are you doing this in your life???

Where are you allowing “non-soulmate chairs” to into your life??

Where do you have stuff…. or things…. or thoughts….. or routines/habits that are TAKING UP SPACE IN YOUR LIFE because they are NOT ‘soulmate things’?

I’m serious here! If you have a bunch of stuff/ thoughts/ clogging up your energy field, your mind, your emotions… it is harder to move forward. Because these things are taking up space/energy.

“Mediocre stuff is ok for me.”

“Things that don’t really suit my energy are ok for me.”

“Things that aren’t a hell yes are ok for me.”

Which doesn’t make space for what REALLY MATTERS. What you really WANT. And what really is suited for YOU. What you DEEPLY DESIRE. What you want more than ANYTHING.

What is your soulmate life?

What is your soulmate vision?

What is your soulmate couch vision?

So my exercise for you today is… to look around your house and ask yourself, “What is aligned with my highest vision, and what is not?”

“What needs to stay?”

Then do what feels right accordingly.

Wishing you alllll the soulmate couches that you could ever want…

I have already put the non-soulmate chairs in the next (different) auction so they are scheduled to leave soon. Besides, I don’t think the epic soul-mate couch wants to hang out them too much longer anyways.